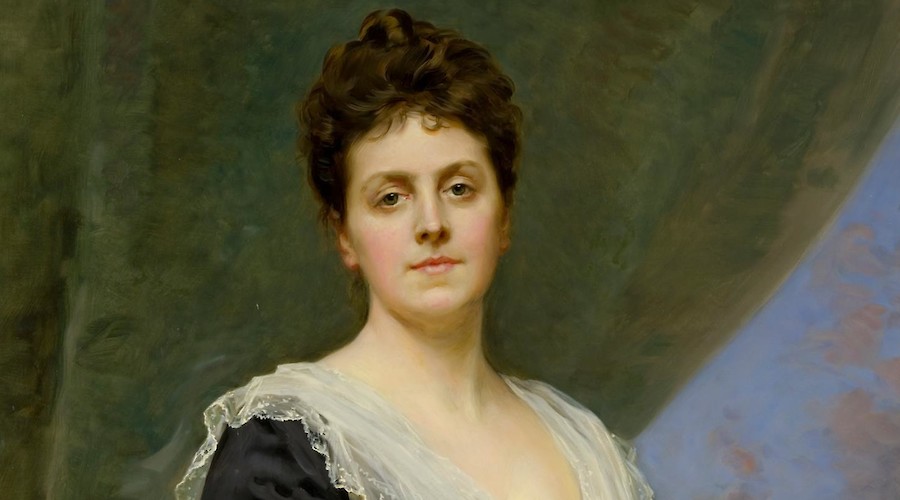 Singer, composer, pianist, mother to five children with three different men; wife to four husbands, two of whom were brothers; lived in New York, Paris, Coswig, Germany, and Caracas; performed for two Presidents at the White House; has a book written about her. Meet Teresa Carreño, international superstar and absolute legend of the 19th century.

Born on this day in 1853 to a father from a musical family and a mother whose cousin was the wife of Simón Bolivar, María Teresa Gertrudis de Jesús Carreño García was an internationally recognized pianist, soprano, composer, and conductor. Over the course of her 54-year concert career, she became an internationally renowned virtuoso pianist and was often referred to as the “Valkyrie of the Piano”.

Her family was exiled and moved to NYC in 1862, where she soon made her debut on piano at age 8. Soon she was performing all over the east coast and performed for Abraham Lincoln at the White House.

In 1966 the family moved again, to Paris, where she studied voice with Rossini and began to perform in operas. She returned to NYC again with a performance troupe to perform the role of Zerlina in Don Giovanni. In this troupe she met and fell in love with Emile Sauret, a violinist, and the first of her four husbands. They had one daughter, Emilita, who they quickly turned over to a friend so that they could continue performing. The daughter was eventually adopted by the friend.

After divorcing Sauret, she became the common-law wife of Giovanni Tagliapietra. They had three children, two of which became musicians. She kept performing and showcasing her own works and works of her peers, which was common practice at that time. In 1885 she returned to Caracas with the intention of establishing a music conservatory and an opera company. But political unrest, unreliable musicians, and other factors got in the way.

In 1889, she debuted with the Berlin Philharmonic, conducted by Gustav F. Kogel at the Singakademie, performing Edvard Grieg‘s Piano Concerto, Schumann’s Symphonic Studies, Op. 13, and Weber’s Polonaise brillante (arr. Franz Liszt). Around 1890, Carreño met Scottish-born German pianist and composer Eugen d’Albert. Their musical friendship turned romantic and by late 1891 they moved into a home, which they named Villa Teresa in Coswig. They were married on July 27, 1892, and had two daughters. They often appeared on the same program and Carreño began performing works by d’Albert, including his Piano Concerto no. 2, Op. 12. D’Albert’s controlling nature eventually was too much for Carreño, and they divorced in 1895. Two years later she was reunited with Arturo Tagliapietra, the brother of her second husband, whom she married in 1902.

Carreño returned to the United States in 1897 to an adoring public. She performed all over the East Coast as a solo artist and with orchestra under the batons of Edvard Greig and Gustav Mahler, among others. The Hartford Courant wrote of her: “Teresa Carreno the piano virtuoso, made her first appearance today at the Philharmonic Concert, Carnegie Hall, under the baton of Anton Seidl. Her magnificent technique displayed to the highest degree the marvelous sonority of the Knabe piano, upon which she played, and she received one of the greatest ovations of the season.”

Henry Wood wrote that “It is difficult to express adequately what all musicians felt about this great woman who looked like a queen among pianists – and played like a goddess. The instant she walked onto the platform her steady dignity held her audience who watched with riveted attention while she arranged the long train she habitually wore. Her masculine vigour [sic.] of tone and touch and her marvelous precision on executing octave passages carried everyone completely away.” It is worth mentioning that in 1897 it was a compliment to describe a woman as having “masculine vigor.” Luckily, that practice has ended.

She spent the remainder of her career performing across Europe and the US, and finally performed again at the White House for Woodrow Wilson. She became ill and passed away at age 63  in NYC at 740 West End Ave, where there is a plaque commemorating her.

She composed approximately 75 works for piano, voice and piano, choir and orchestra, chamber music, and several merengues, incorporating the form as an interlude in some of her pieces (for example, in her piece entitled Un Bal en Rêve), and recorded over 40 works for the “reproducing piano” or player piano.

There is a children’s book about her called “Dancing Hands, how Teresa Carreno played the piano for Abraham Lincoln” by Margarita Engle that won the Pura Belpre award in 2020.

It is hard to imagine a life lived so fully in a time that so strictly controlled women. Teresa Carreño’s grit, determination, and belief in herself are inspiring, and come across in her music. The String Quartet in b minor, which will be on the Fairmount String Quartet’s upcoming album, is a work every bit as intense and passionate as she was.

Happy Birthday to The Valkyrie of the Piano.