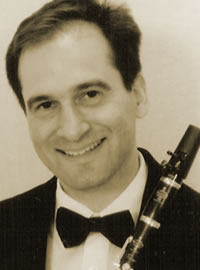 Dr. Christopher Di Santo, a native of Columbus, Ohio, joined the faculty of Stockton University in January 2012 as Associate Professor of in the university’s School of Arts and Humanities.  His duties at Stockton include teaching courses in music appreciation, conducting, music theory, form and analysis, and conducting instrumental ensembles.  He is also the director of the Bay-Atlantic Symphony’s Music Mentorship program, an initiative that affords selected Stockton music students the opportunity to be paired with musicians from the Bay-Atlantic Symphony who act as mentors in a unique setting as visiting instrumental specialists in local middle and high school music programs.  Dr. Di Santo’s former teaching positions include appointments on the music faculties of Moravian College, as Artist-Lecturer, and as adjunct faculty in the music departments of Swarthmore College and West Chester, Lehigh and Rowan Universities.

Recent career highlights include an invitation to present at the 7th Annual Arts, Humanities, Socials Sciences & Education Conference in Honolulu Hawaii (January 2018), an invitation to deliver a keynote address at the 10th Pan African Society for Musical Arts Education (July 2, 2017) in Mbabane, Swaziland, Africa, and presenting at the Eastern Division Conference of the National Association for Music Education, Atlantic City, NJ, April 2017.  Dr. Di Santo has acted as host/facilitator for the Steinway Competition Winners Recital, Galloway NJ, (May 2016 and April, 2017) and, in December 2006, he accepted an invitation to Shanghai, China where he performed as soloist with the Shanghai Conservatory Symphony Orchestra and conducted a series of masterclasses with the Shanghai Conservatory of Music’s highly talented and advanced clarinet students.  He was invited to appear as guest conductor of the Atlantic Cape Honor Band for a performance on December 4, 2016 where he had the privilege of conducting almost ninety, hand-selected, highly-talented high school students from twelve music programs in southern New Jersey.

Dr. Di Santo is currently the Principal Clarinetist of the Bay-Atlantic Symphony, a position he has held since 1991.  A participant in music festivals in both North America and Europe, he has performed throughout venues in the United States, Canada, Austria, Germany and Italy.  Recording credits include Lee Pui Ming’s She Comes to Shore:  concerto for improvised piano and orchestra in 2010 with the Bay-Atlantic Symphony as well as Verdi’s Requiem and Mozart’s Requiem K. 626 with Philadelphia’s Vox Ama Deus Ensemble.  His clarinet playing and commentary were highlighted on NPR’s Morning Edition on October 9, 2004, later broadcast in translation over Voice of America, throughout Europe and the former Soviet Republics.

Publishing credits include articles in The Clarinet (the official journal of the International Clarinet Association), and the International Alliance for Women in Music journal.  Other media credits include a feature article entitled A Marriage of Music and Harmony in the March 2007 issue of Down Jersey Magazine, a front-page photo on the October 13, 2011 edition of The Press of Atlantic City’s At the Shore Magazine (with his wife Karen, also a member of the Bay-Atlantic Symphony), and two recent interviews appearing in the Arts and Entertainment section of the Press of Atlantic City.