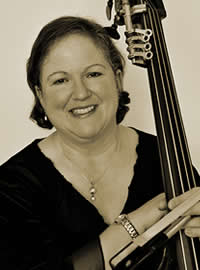 Philadelphia native Joanne DiMaria Bates began her studies at the Settlement Music School with Eligio Rossi. She was awarded a fellowship from the Ford Foundation to study with Henry G. Scott of the Philadelphia Orchestra while at Girls’ High, and continued working with him for a year at the New School of Music until entering the Curtis Institute of Music. At Curtis, Joanne studied with Philadelphia Orchestra principal bass Roger M. Scott, and worked extensively with Karen Tuttle, Felix Galimir and Mischa Schneider for chamber music. Joanne was a Koussevitzsky Foundation Fellow at Tanglewood, where she studied with the Boston Symphony’s principal Edwin Barker and assistant principal Lawrence Wolfe. Joanne also participated in the Aspen Music Festival and the Colorado Philharmonic (now the National Repertory Orchestra), and has performed as a substitute member of the Philadelphia Orchestra at both the Academy of Music and Carnegie Hall. In addition to the Fairmount Chamber Ensemble, Joanne has performed with the Princeton Symphony, the Riverside Symphonia, Vox Amadeus, the Delaware Symphony, the Lancaster Symphony, the Black Pearl Chamber Orchestra, Relache, Network for New Music, Orchestra 2001, the opera companies of Philadelphia, Delaware and Trenton, and many other organizations. Joanne is on the faculty of Germantown Academy, St. Basil Academy, Temple University’s Music Prep, Kutztown University and Chestnut Hill College.