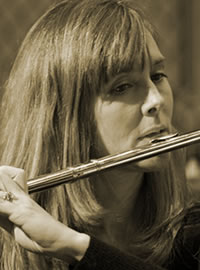 Michele Kelly is the flutist and co-Artistic Director of Relâche, the ensemble for new music. The octet is known worldwide for its innovative programming, multidisciplinary collaborations, and a library of commissioned works numbering well into the hundreds. Ms. Kelly appears on the group's last four recordings, Press Play, Eight Point Turn, Kyle Gann's The Planets, and the soon-to-be released Comix Trips. She also appears on the Centaur Records disc Flute Loops, featuring the chamber music of Cynthia Folio. When not with Relâche, she performs regularly around the region in a variety of settings, from two- and three-piece chamber ensembles to symphony orchestras. Ms. Kelly is also a College House Teaching Fellow at the University of Pennsylvania, where she is also the founder, Music Director and conductor of Penn Flutes, an ensemble in excess of thirty players with regular performances and educational outreach programs throughout the region. Ms. Kelly also maintains a similar flute ensemble consisting of members of her private studio, Fresh Flute. She received her Masters of Music from the University of Michigan, where she also received a Specialist's degree in Chamber Music Performance. The daughter of noted abstract expressionist artist James Groff lives in the Fairmount section of Philadelphia with her family.