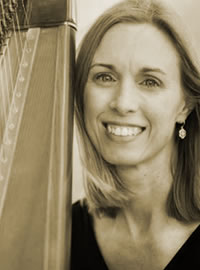 Principal Harpist for the Pennsylvania ballet, Mindy Cutcher is an in-demand professional soloist, teacher and recording artist in Philadelphia. Symphonic engagements include the Baltimore and Delaware Symphonies, the St. Louis Symphony and Philadelphia’s Chamber Orchestra. Mindy has performed on The Tonight Show and with notable names such as Joshua Bell, Josh Groban and Anne Hathaway. She studied with world-renowned Alice Chalifoux at the Oberlin Conservatory of Music where she received her Bachelor of Music degree in Harp Performance. Mindy has traveled the world playing on cruise ships, loves a good read and is a s’more connoisseur.  Originally from Baltimore, Mindy now resides outside of Philadelphia with her husband, two children and a Cockapoo named Hubble.