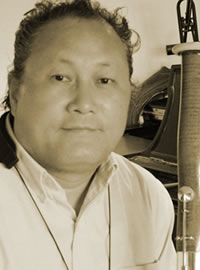 Born in Shanghai, China, Ping Liang received his Bachelor for bassoon from Shanghai Conservatory. His teacher at the Conservatory was Prof. Zhao Zhun. He was a featured soloist at the Young Soloists Concert of Shanghais Spring Festival in 1978, which was the first re-organized musical festival after The Culture Revolution. The Central Radio Station of China recorded his three pieces played for that concert serial. In 1981, as a recipient of DAAD (Deutscher Akademischer Austausch Dienst – German Academic Exchange Service), he was sent to Germany by The Education Ministry and Culture Ministry of China. He received his Master of Music degree from The Hochschule fuer Musik in Wuerzburg in 1984 Germany, under the guidance of Prof. Eberhard Buschmann. During that time he was also a member of the Junge Deutche Philharmonie. In 1985, he recorded the Grand Concerto in F Major by Hummel with Shanghai Chamber Orchestra, conducted by Mr. Shui Lan. Before came to the United States in 1986, he was a faculty member of the Department for Western Orchestral Instruments at Shanghai Conservatory. His teachers in the United States include Loren Glickman at Julliard School in New York City, Ronald Tyree at Iowa University and Bernard Garfield at Temple University.

He was a Fellow at Tanglewood in 1987 and currently, he is the principal bassoonist of Bay-Atlantic Symphony Orchestra, NJ, and one of the founding members of The East Winds Quintet, an Artist-in-Residence at Lehigh University PA since 2000, and a free-lancing musician in the great Philadelphia area. In 2012, he was invited by the Central Conservatory of Music China to the Second International Bassoon Festival in Beijing as a guest.