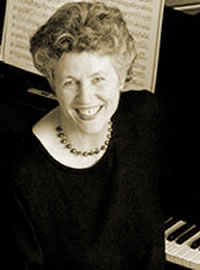 Rahel Inniger received her “lehrdiplom” (teaching diploma) in 1979 from the Konservatorium Bern (Switzerland) where she was a student of Rosemarie Stucki. As a recipient of a Kiefer/ Hablitzel Stiftung scholarship she was able to come to the United States to continue her education. She majored in piano performance at the Eastman School of Music in Rochester, from which she received a Master of Music degree in Performance and Literature in 1982. Ms. Inniger's piano teachers at Eastman included Barry Snyder and Barbara Lister-Sink, and chamber music coaches included Abram Loft, Peter Salaff and Rebecca Penneys. Further studies included vocal accompaniment with Daphne Ibbott in Sussex, England and music pedagogy workshops in Stuttgart and Bad Hersfeld, Germany.

In 1982  Ms. Inniger accepted a teaching position at the Musikschule Kandertal in Frutigen, Switzerland where she remained until 1986. During this time she served as accompanist at the Konservatorium Bern in the master classes of clarinetist Jost Michaels and cellist Siegfried Palm and in the studios of clarinet professor Kurt Weber and violin professor Igor Ozim. Ms. Inniger has been employed as staff accompanist at the Settlement Music School as well as collaborating in recital with instrumentalists and vocalists both in the United States and abroad. She is currently on the faculty at Settlement Music School in Philadelphia where she teaches both piano and chamber music, and also maintains a private teaching studio in Ardmore, Pa.