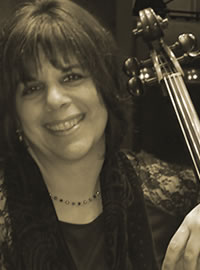 The recipient of the Edwin E. Stein Award for Excellence in Musical Studies, cellist Talia Schiff completed her undergraduate studies at Boston University under renowned cellist Leslie Parnas. As winner of the 1982 Austrian-American Society Mozarteum Scholarship Competition she was awarded a summer of study in Salzburg with legendary cellist Antonio Janigro. She later attended the Peabody Institute in Baltimore, earning her Master’s degree in the studios of concert cellists Stephen Kates and Yehuda Hanani. Ms. Schiff subsequently went on to become a founding member of the Castalia String Trio, semifinalists in the 1987 Fischoff International Chamber Music Competition.

In 1989 Ms. Schiff continued to pursue her love of chamber music with the Tenor Clef Dwellers: a cello quartet, which she established with three colleagues. For the next decade she devoted much of her artistic energy to developing the performance and repertoire of the cello quartet ensemble. In Spring of 2001, a collection of music she had transcribed for the Tenor Clef Dwellers’ performances was published by Musicelli Publications.

At present Ms. Schiff’s chamber music pursuits focus on her work with Elysian Camerata, with whom she has performed since 2004. An ensemble made up of string quintet and piano, the Elysians regroup into various size and types of ensembles to perform a wide range of chamber music encompassing literature from the Baroque to contemporary. With them, Ms. Schiff performs regularly throughout the season, both locally and on tour.