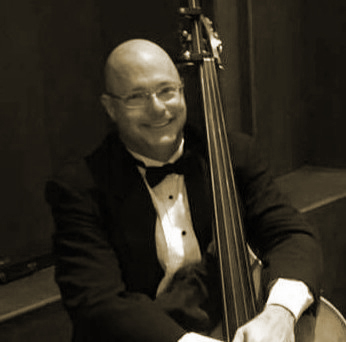 A Magna Cum Laude honors graduate of West Chester University, Mr. Raub has been an active freelance Double Bassist in Southeastern Pennsylvania since 1980. In addition to colleges such as Ursinus, Franklin & Marshall, Lafayette, Muhlenberg, Moravian, the University of Valley Forge, Kutztown University, Lehigh University, and the University of Pennsylvania, Tim has appeared regularly with Berks Grand Opera, Opera Delaware, the Kennett Symphony Orchestra, the Lancaster Symphony Orchestra, the Reading Choral Society, the Reading Symphony Orchestra, the Schuylkill Symphony Orchestra, the Pennsylvania Sinfonia, the Wheaton Chorale, and the Lehigh Valley Chamber Orchestra. Beyond his performance schedule, Tim served as Personnel Contractor and Orchestra Manager for the Pottstown Symphony Orchestra Association for more than fifteen years, as well as Associate Principal Double Bass from 1980 to 2006. Raised in Montgomery County and residing in Berks County, Tim considers this area his home and held the Music Director post at First Baptist Church (Pottstown) from 1987 to 2005. During his tenure, the music program at FBC sponsored a variety of special projects with combined choirs from public schools and other churches; moreover, he spearheaded new outreach opportunities for institutions such as The Frederick Mennonite Home, Manatawny Manor, and Berks County Prison. In addition to his conducting duties at FBC, Tim has also appeared as Guest Conductor for other organizations and events, such as the 125th Anniversary Celebration of Trinity Reformed Church (Pottstown) and additional community performances at Berks County Prison.

Music Education continues to be a priority for Mr. Raub and his students have competed in Pennsylvania and nationally. Since 1984, his Berks County students have taken first chair at PMEA District, Regional, All-State, and All-Eastern Orchestra Festivals. Locally, several students appeared in the Double Bass section or as soloists with The Reading Symphony Youth Orchestra, The Philadelphia Youth Orchestra, as well as The Reading Symphony Orchestra. Other highlights of student achievement include Honorable Mention at The International Double Bass Competition (Houston) and several hundred thousand dollars in scholarships for Penn-State University, Temple University, and the Peabody Conservatory. When the Reading School District appointed Mr. Raub in 2000, he was the only full-time elementary String Specialist and there were only two string positions serving less than 200 students in the City of Reading. There are now five positions serving more than 800 String Orchestra students throughout the entire school district!

Between seasons, Tim travels throughout Central America and enjoys snorkeling on the world’s second largest coral reef, photographing amazing wildlife, and exploring hidden ruins as far away from other tourists as possible. During winter vacation, Tim looks forward to the warmth and relaxed change of pace in old town Key West.